Syntheogen allows you to join steps with ties, somewhat the way notes are joined with ties and slurs in traditional music notation. When two steps are tied, a single note is played from the start of the first step to the end of the second. If the steps have the same pitch and level, the note maintains those properties throughout its length. If the steps have different pitches, the first pitch is played for three-quarters of the distance from the first step to the beginning of the second; the note then smoothly approaches the second pitch, and holds that value until the second step is complete. Similarly, if the steps have different levels, the first level is held for three-quarters of the distance to the second step, smoothly approaches the second level, and then holds it throughout the second step.

Ties are added by activating the SELECT button on the LOOP STEPS dialog, selecting the first step, and pressing RIGHT TIE to create or increment a tie mark on the step's right side. After selecting the second step, the LEFT TIE button is pressed to create a matching mark on that step's left side. Marks can also be set from the NOTE PROPERTIES dialog, which is displayed by long-tapping any note.

Each side of a given step can have a single mark in one of four vertical positions. The marks on the steps must match, so if the right mark on the first step is in the bottom position, the left mark on the second step must also have that position. After the marks are set, a line will appear showing the connection: 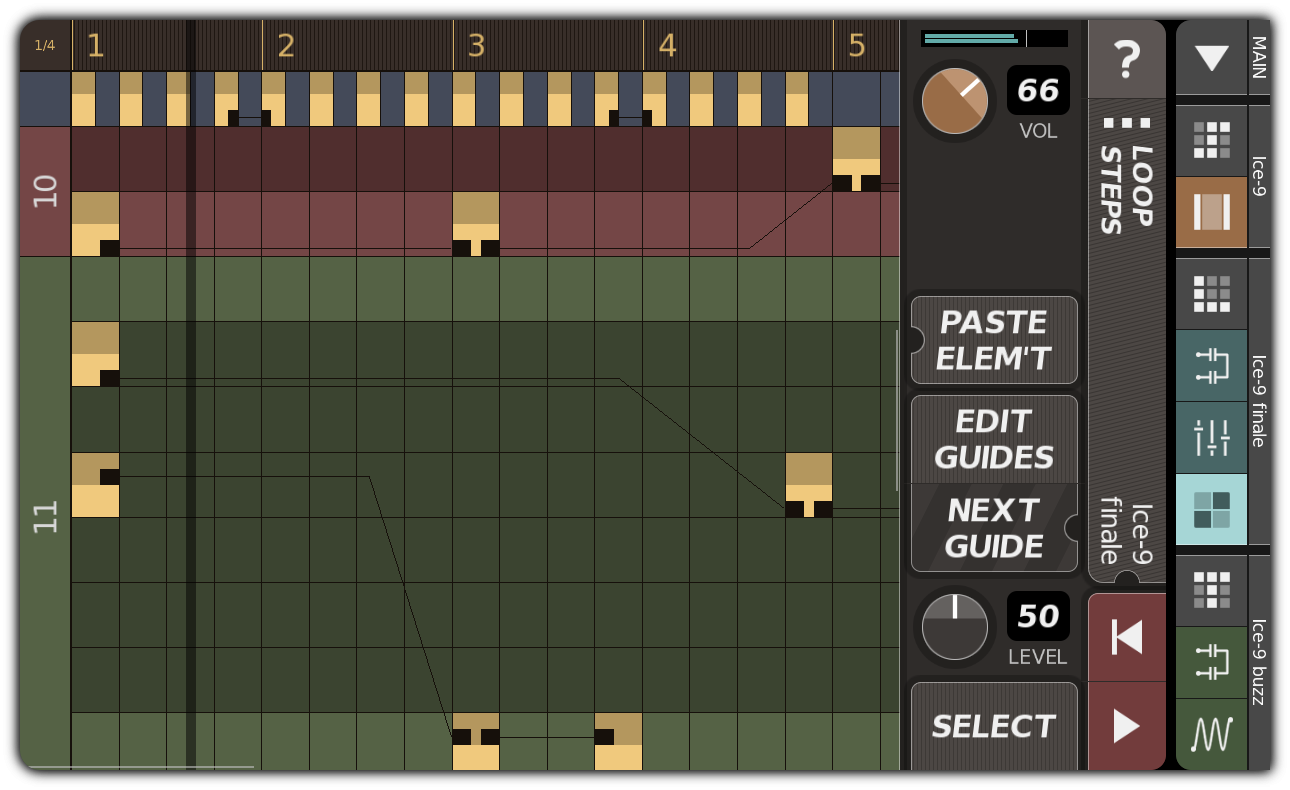 Since there are four different tie positions, up to four tied notes can be played at once. This allows you to bend entire chords, which is not typically possible with portamento.

A step can be tied on both sides, so it is possible to create long chains that produce a single note with many pitch and level variations. Ties can also link steps across loop iterations, so that a right tie at the end of a pattern joins a left tie at the beginning. Steps can even be tied this way to themselves, producing continuous notes that sound as long as the loop is played.

A given right tie connects to the first matching left tie that follows it, even if the matching step is part of a different guide; for this reason, it may not be possible to see both steps in a tie without cycling through the guides. Note also that if several steps in the same column have the same left tie, it will be impossible for Syntheogen to determine which is the target of a corresponding right tie; in this situation, the output will be undefined.